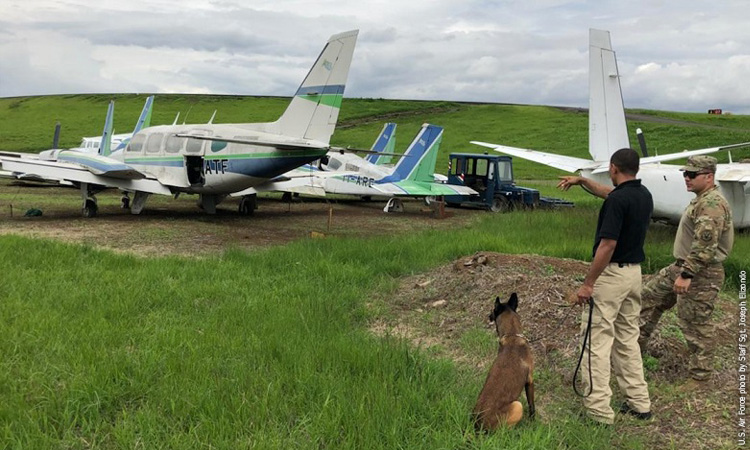 The 571st Mobility Support Advisory Squadron recently conducted their first-ever mission to the Central American country of Costa Rica. The nine member team, executed a three-week building partnership capacity mission with the air vigilance service, of SVA, from May 16 through June 9, 2018.

Costa Rica is one of the oldest democracies in the region; the country formally abolished its military on December 1, 1949. According to Article 12 of the Costa Rican constitution, the abolition was deemed essential to strengthen civilian society and the country would benefit from investments made to education, social programs and environmental preservation instead.

The internal security of the country was formerly administered by the civil guard, over the years it has transformed into what is now known as the public forces of Costa Rica. The public forces is comprised of many sections and the MSAS team was selected to engage, train and help establish a lasting partnership with the SVA.

“This was our first mission to Costa Rica and my team executed and established the groundwork to build and strengthen a solid foundation of interoperability between our nations and to create a new and growing relationship,” said Maj. Noelle DeRuyter, mobile training team  mission commander. “There can be no static script when working with any country let alone a country as unique as this one.  My team had to be agile and ready.”

The MSAS executed courses in the specialty areas of aircraft interdiction, aircraft maintenance, base defense and dog handling. The MTT executed more than 250 combined hours of instructions with 88 SVA members.

“MSAS teams are uniquely capable of teaching in the host countries native language. We can dynamically tailor Air Mobility Command’s approved course material to better suit the needs of the partner nation, but most of all it enables us to better meet our assigned military objective(s),” DeRuyter said.

The MTT’s instructors provided training, assessments and critical observations which resulted in key recommendations to our partner nation.

For example, the MTT’s aircraft maintenance instructor, Master Sgt. Alejandro Medina, was able to assist in the validation of over $250,000 in B200 Super King Air aircraft repairs through an already established relationship with the Central American Beechcraft representative. His actions not only saved valuable time and resources, but enabled the aircraft to be returned to fully operational ahead of schedule.

According to Tech. Sgt. Andres Tovar, a security forces Airman assigned to the 824th Base Defense Squadron out of Moody Air Force Base, Georgia, the security forces team was able to further the SVA’s learning standards and objectives to improve the dog and handler relationships.

“The men and women of the SVA are true professionals and were well prepared for the tasks ahead. The entire MTT was a huge success, consisting of bi-directional learning from all involved,” said Master Sgt. Brandon Van Walraven, MTT team sergeant.  “The team was lauded and continually thanked for their unmatched professionalism and knowledge by the SVA students and leadership.”

The 571st MSAS is a language enabled group of men and women who assess, advise and assist Latin American and Caribbean countries to enhance their airpower capabilities. This team of air advisors assist the Air Force’s enduring building partner capacity mission. Each successive engagement assists to achieve freedom, stability and prosperity in the region, and contributes to the United States Southern Command’s joint intermediate military objectives.