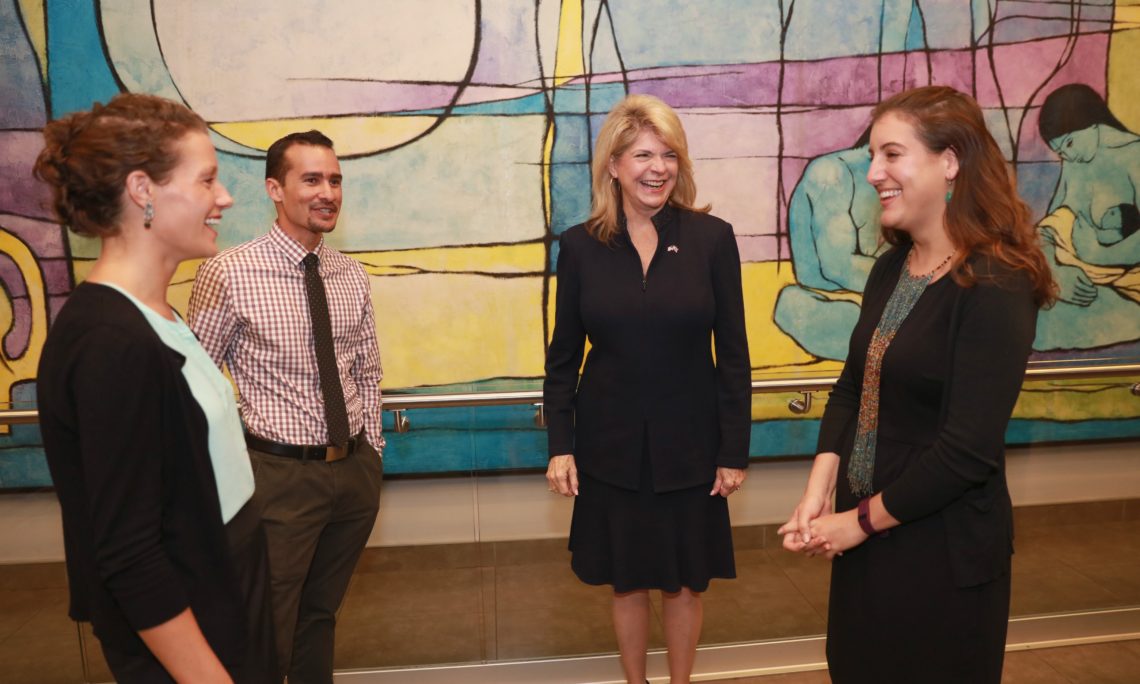 The Fulbright Program is the flagship international educational exchange program sponsored by the U.S. government and is designed to increase mutual understanding between the people of the United States and the people of other countries.

During the celebration of the 71st anniversary of the program, organized by the Costa Rican Fulbright Alumni Association, Ambassador Day had the opportunity to meet Costa Rican alumnae as well as three of the U.S. Fulbrighters that are currently in the country.

Chelsea Kolb, Jennifer Rogla and Daniel Mendiola shared with Ambassador Day about the impact of the program in their life and explained about their projects in Costa Rica.

Jennifer Rogla, a Fulbright-Hays Fellow and Ph.D. Candidate in Political Science and International Relations at the University of Southern California, studies the politics of international development. Hosted in Costa Rica by CATIE (Centro Agronómico Tropical de Investigación y Enseñanza) in Turrialba, she is working with widely-experienced professors to look at past projects CATIE has implemented in Costa Rica on behalf of various foreign aid donors in the areas of Talamanca, Térraba Serpe, and communities around the Parque Internacional de la Amistad. Through interviews and site visits, she is exploring the power local actors have in development aid interactions. She is hoping to contribute to the development field by working to understand what incentivizes communities to participate in foreign-funded development projects and whether certain types of incentives lead to longer lasting changes. She is also working to create a new measurement of development project outcomes, which better captures the way projects work in the complex environments where they are implemented.

Daniel Mendiola is a doctoral candidate in history using his Fulbright Grant to conduct research at the National Archives of Costa Rica.  Daniel’s research focuses on interactions among Spanish, indigenous, and African-descended people in colonial Central America in order to show how diverse groups of people contributed to the region’s rich history.  In addition to collaborating with local archivists and historians to conduct his research, Daniel also volunteers as an English and Math teacher with Merienda y Zapatos: an organization founded by a UCR professor in 2003 that provides support to immigrant youth.

The number and caliber of participants in the Fulbright Program—more than 325,000 since it started—have been impressive. These participants include 122,800 from the United States and 202,600 from other countries. The Fulbright Program now sends American students and scholars across the globe to do research, provide technical assistance, and serve as English teaching assistants, usually in underserved communities with limited access to native speakers of English. At the same time, thousands of undergraduate and graduate students from more than 155 countries enter colleges and universities across the United States every year.

The alumni of the program are remarkable, not only because of their commitment to international understanding but also because of their accomplishments beyond the program itself. So far, 59 participants have won the Nobel Prize, 71 have received John D. and Catherine T. MacArthur Foundation fellowships, 82 have received the Pulitzer Prize, 16 are recipients of the U.S. Presidential Medal of Freedom, and 37 have served as heads of state or government. Clearly, the program serves as a proving ground for leaders, thinkers, scholars, and other drivers of global progress.