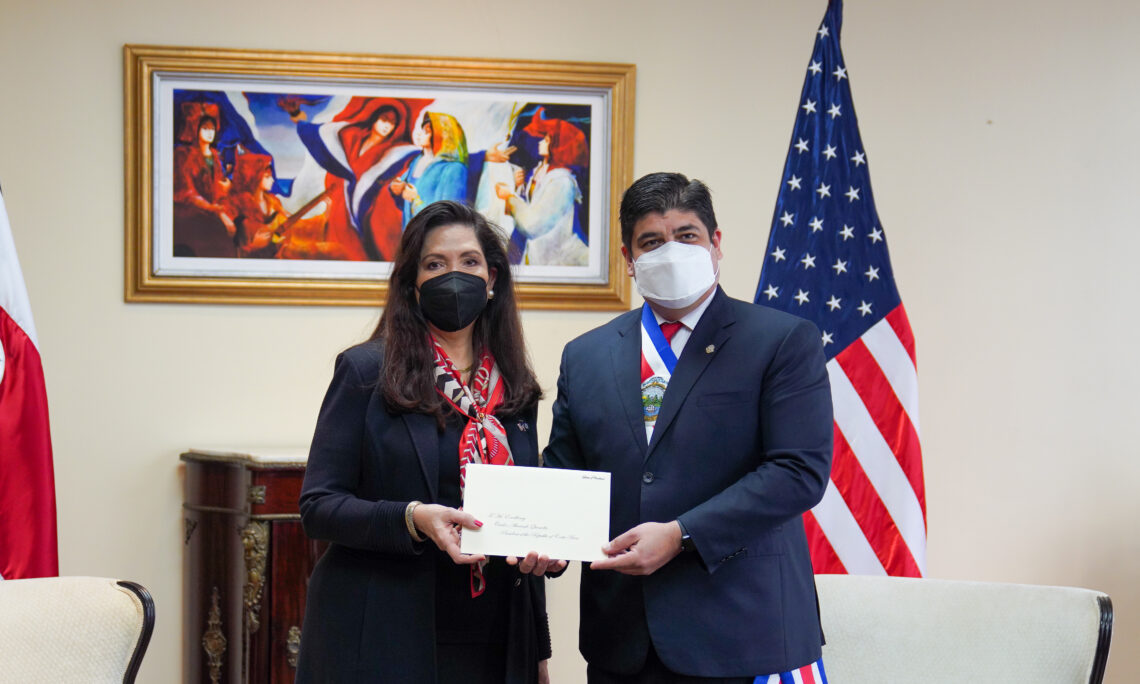 She arrived in the country on March 8 and the next day she met with United States Embassy personnel, ​​to meet her work team.

Nominated by President Biden and sworn in as United States Ambassador to Costa Rica on January 30, 2022, Cynthia Ann Telles begins her official duties today after presenting her credentials to President Carlos Alvarado.

It is an honor to present my credentials to President Alvarado to begin my term as President Biden’s representative in Costa Rica, the country my father called a ‘little piece of heaven’ when he was ambassador. I am excited to continue strengthening the deep friendship between our two countries by building a region that is more democratic, more prosperous and more secure,” said Ambassador Telles.

Ambassador Telles is fluent in Spanish and spent six years of her youth in Costa Rica, when her father, Raymond Telles, served as the first Hispanic Ambassador to the United States, nominated by President John F. Kennedy.

Ambassador Telles was previously a Clinical Professor in the UCLA Department of Psychiatry at the UCLA David Geffen School of Medicine and served on the Executive Committee of the UCLA Semel Institute for Neuroscience and Human Behavior.  She was the Founding Director of the UCLA Hispanic Neuropsychiatric Center of Excellence. Additionally, Ambassador Telles served on the Board of the Pacific Council on International Policy for over a decade and was appointed by Los Angeles Mayor Eric Garcetti as the Chair of the Mexico-Los Angeles Commission.

Ambassador Telles served as a Commissioner of the City of Los Angeles for almost two decades, most recently as a member of the Los Angeles World Airports Commission.  On the national level, Ambassador Telles was a member of the White House Commission on Presidential Scholars and the National Advisory Council of the Substance Abuse and Mental Health Services.  She served on the Board of the Kaiser Foundation Health Plan and Hospitals (Kaiser Permanente) for 18 years.  She also served on the boards of General Motors, Co., BNSF, and Sanwa Bank California. Additionally, Ambassador Telles was a founding board member of Americas United Bank, the first Hispanic commercial bank to be chartered in California in over 30 years.  Her numerous philanthropic activities included service as the Chair of the California Community Foundation, and Chair of The California Endowment, the largest health foundation in California.

Ambassador Telles received a B.A. from Smith College and a Ph.D. in Clinical Psychology from Boston University.  She is fluent in Spanish and spent much of her youth in Costa Rica when her father served as U.S. Ambassador for six years.