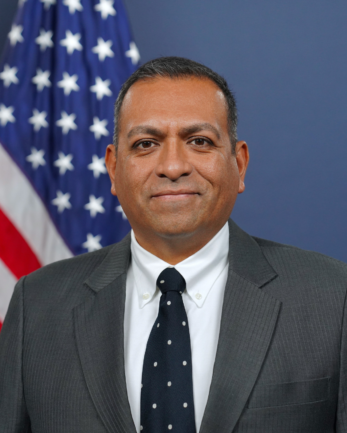 Mike Flores is the Deputy Chief of Mission of the U.S. Mission to Costa Rica.

A career member of the Senior Foreign Service, Mike joined the U.S. Foreign Service on September 10, 2001. Mike served overseas tours in Bogota, Moscow, St. Petersburg, Bangkok, and Mexico City. He also worked short term in Yekaterinburg, Tashkent, Kathmandu, and Yangon. Mike completed a one-year detail to the Mexican Ministry of Foreign Affairs. In Washington DC, Mike previously served as the Special Assistant to the Acting Under Secretary for Arms Control and International Security and as a Multilateral Affairs Officer in the Office of United Nations Political Affairs. He served as Deputy Director and then Director for the Office of Canadian Affairs from 2019-2022. Before arriving to Costa Rica, Mike served as Director for the Office of Indian Affairs and Acting Deputy Assistant Secretary for Nepal, Sri Lanka, Bangladesh, Bhutan and Maldives (July-September 2022).

Mike, originally from East Los Angeles, earned a bachelor’s degree in History and Political Science from California State University, Long Beach. He holds master’s degrees in International Affairs from The George Washington University and in Strategic Studies from the U.S. Army War College. Mike is a State Department Pickering Fellow and speaks Spanish, Russian, and Thai.