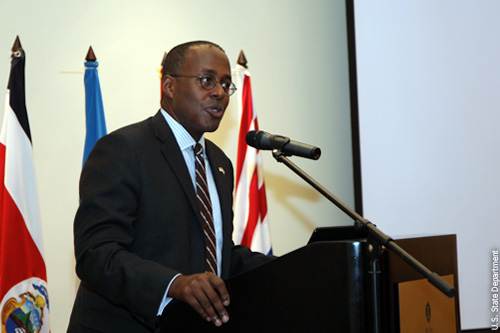 Vice President Chacón and distinguished guests. Good morning! It is my pleasure to welcome you to this first-ever LGBTI Trade Mission Summit in Costa Rica. Thank you Julio César Calvo for your kind invitation and your vital work since founding Costa Rica’s Diversity Chamber in early 2015, which led us to today’s inaugural event.

This June, I had the honor of raising the LGBTI pride flag for the first time at the Embassy, where it flew all month. I also enjoyed marching with Vice President Chacón, my Embassy and Peace Corps colleagues, my friend Ambassador Michael Gort of Canada and his team, and 20,000 Costa Ricans in the annual Diversity March, the largest in Central America. June ended with a magnificent display of the rainbow colors of LGBTI equality on the Embassy façade. We believe it is very important to clearly show our support for the Lesbian, Gay, Bisexual, Transgender, and Intersexual (LGBTI) community and demonstrate our commitment to tolerance, acceptance, and equal rights for all citizens, regardless of their race, religion, ethnicity, or sexual orientation.

As each of you can agree, recognizing LGBTI equality is good business. It is in everyone’s interest to attract the very best business opportunities, and we can only do so if we are inclusive. Attendees to this summit are here to explore ways to increase LGBTI tourism, trade, and investment in Costa Rica.

Incremental change comes from hard work, with watershed moments as important markers. President Solis flew the diversity flag soon after taking office in 2014, which was an enormous symbolic step forward. Gay and lesbian couples in Costa Rica gained partner rights to medical services under social security in 2014, which includes the right to visit their loved ones in the hospital, another important step forward. [However, government institutions are still not obligated to authorize time off for their employees to care for their same-sex partners.*] Much remains to do, and it is people like you who are assembled here who will keep working toward greater equality.

Vice President Chacón, I want to thank you in particular for your efforts. In 2015, you announced an order making it illegal to discriminate against people for their sexual orientation or gender identity. This decree also ordered public institutions to offer training to their employees and establish other reforms to guarantee equal access to public services for the LGBTI population here in Costa Rica. Many thanks! (applause; pause)

And there are other leaders within the Costa Rican government who recognize the importance of LGBTI rights. Costa Rica’s Legislative Assembly President Antonio Álvarez Desanti is hosting Costa Rican LGBTI activists and Diversity Chamber representatives later today at the Legislative Assembly. I hope Costa Rica’s diputados will look to the sea change in the United States resulting from the push to legalize gay marriage as an example of how much their efforts can advance equality.

Moving back to the specific reason that brings us together today, the United States is Costa Rica’s largest trading partner and biggest source of foreign direct investment. U.S. companies are often champions of workforce diversity in the countries where they operate. For example, here in Costa Rica Procter and Gamble, which I know very well from my work there, is committed to fostering a safe, equitable, and inclusive workplace where LGBTI employees and their partners have the same benefits as heterosexual employees, including medical insurance, and approved days off for maternity, paternity, adoption, and surgery. There are Costa Rican companies as well, like Café Britt, which have had an anti-discriminatory policy for years.

Despite recent gains, like gay marriage being the law of the land in the United States, we cannot be complacent. Across the world, including in the United States and here in Costa Rica, hard work and perseverance is critical to ensure that the gains made for the LGBTI community are upheld and expanded until equal rights are achieved. For example, the U.S. business community continues to stand up against discriminatory laws passed in individual U.S. states that chip away at the full equality promised by the legalization of gay marriage, and only 19 states have laws which prohibit workplace discrimination based on sexual orientation. When the business community finds it voice, its influence is profound. And it is important that we realize we all have a critical role to play. The battle for civil rights for African-Americans would not have been possible without the active support of ordinary white Americans. The same holds true in the fight for LGBTI rights. The movement needs the support of all of us. I want to assure you that the U.S. Embassy in Costa Rica is here to support you in these efforts. We will stand with you and for you, every single day until we are all treated equally, regardless of who we worship, who we look like, or who we love.

Have a great summit, engage in the important discussions needed to move LGBTI rights and business interests forward, and keep in mind that the work you do today will help lead to those watershed moments of positive change in the future. Thank you.

Footnote:
*Licenses for illness were added to the law in May 2016.