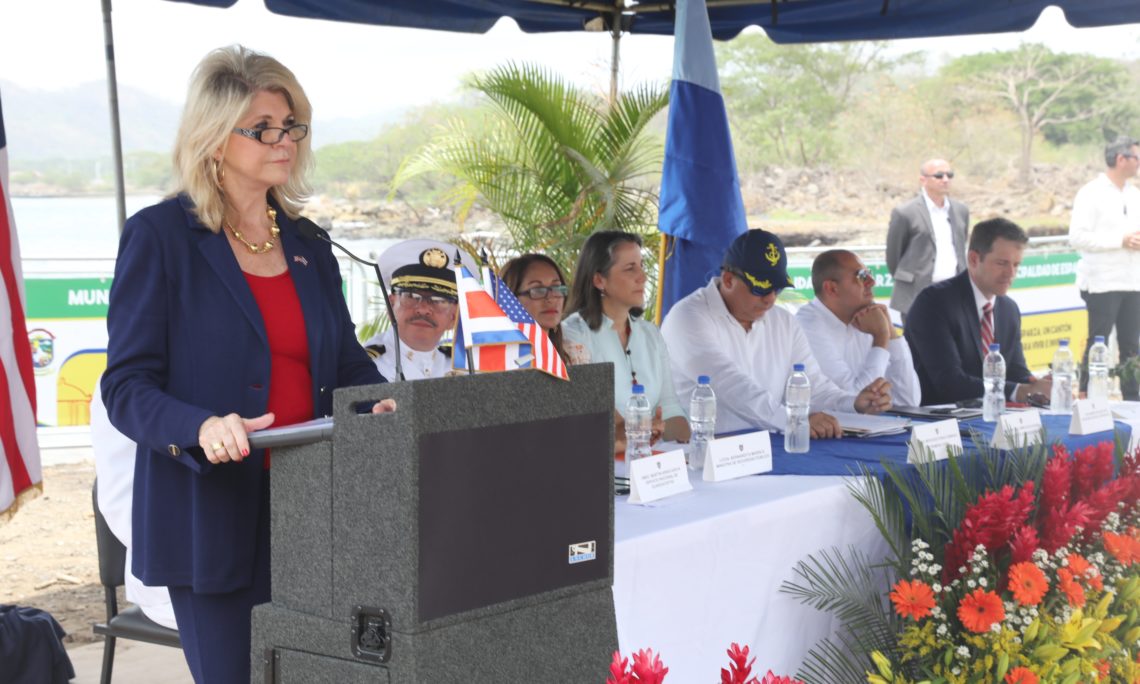 Thank you for being here today and thank you for sharing this historic and important day….

Before I arrived in Costa Rica I understood the battle you were fighting against drugs and the organized crime scourge that was changing your beautiful country. Because I have also witnessed the impact of drugs in my own country and the impact it has had on my fellow citizens all across my country in communities just like yours.

To be honest it’s one of the reasons why I chose to come to Costa Rica. Because like all of you here. I want to stop the transportation of drugs into Costa Rica and into my country. I want to do all that I can to help Costa Rica be successful in this battle because as I have said before every ounce of drugs that are seized of shore by the Costa Rican Coast Guard is one less ounce that makes it on to your shores, and one less ounce that potentially finds its way onto our streets in the United States.

The United States and Costa Rica have long been friends and partners in security. Our friendship has been bound to one another by our mutual love of democracy, our love of freedom, and our love of liberty and together we will continue to do all that we can to liberate our two countries from drugs, so that all our citizens can share the freedom from organized crime and from the damage that drugs and drug gangs create.

Today, with this ceremony we strengthen the key building blocks of our partnership in security and safety cooperation and I am very proud to have been a part of the tremendous team that orchestrated the transference of these 3 magnificent vessels.

In October, I had the honor of signing the transfer of the cutters from the United States to Costa Rica. I travelled to Baltimore in February, where I had the opportunity to tour the ships witness firsthand the training of Costa Rica’s dedicated Coast Guard crew and to experience the enormous pride of the Guadacostas as they sang their National Anthem and raised their flag on their vessels.

Recently, with the hard work of many of the Embassy team, we were able to add a third 110 foot cutter to Costa Rica’s Guadacostas’ fleet and finally today we are gathered here together to celebrate not only the commissioning of these three vessels but also the long and continued friendship and partnership of our two countries.

Now we all understand that these ships are extremely important resources for Costa Rica but we also know that more important than any ship is its crew and today I want to acknowledge the dedicated Guadacostas’ crew who spent the last few months enduring the cold winter of Baltimore training tirelessly to become expert operators of these beautiful vessels and becoming the qualified crew whose capabilities were on full display as they bravely sailed their ships in the hard open ocean from the United States to their new home in Costa Rica.

This crew and their leadership have sacrificed time away from their families and their loved ones for the love of their country. And I am honored to say that this crew that stands before us today is ready to serve and protect their country as the first crew of the first vessels ever capable of patrolling the full expanse of Costa Rica’s territorial waters.

Costa Rica now possesses their first true blue water capabilities to disrupt and dismantle the primary maritime transit zone for cocaine, which unfortunately is just offshore in Costa Rica’s waters. 85% of the drugs from South America passes through Costa Rica’s waters and unfortunately those drugs find their way to your country and to the United States as well. You now also have the ability to help halt the in-human actions of trafficking in person the illegal fishing of your waters…and the protection of your country from illicit organized crime.

With the arrival of these cutters to Costa Rica, I can’t help but reflect about how strong our security cooperation has truly become and I believe it is important to recognize the leader of the modern Guadacostas Colonel Arias. Colonel Arias has led his Coast Guard through a period of enormous modernization increased professionalism and extensive capabilities and we are honored to work with him.

I would also be remiss if I did not thank and acknowledge the tremendous efforts being made by the Costa Rican government the Costa Rican and U.S. Coast Guards our Embassy and our Bureau of International Narcotics and Law Enforcement as they work to counter the threats Costa Rica and the region faces I want all of you to know that you have my personal commitment that we will continue to address these challenges together.

None of today would have been possible without the support and commitment of two individuals and their teams that worked tirelessly with only one goal in mind the goal of stopping drugs and illicit illegal activity threats facing Costa Rica, the region and the United States. Without Chris Harris and his INL team and Commander Bergan and his team in Costa Rica and the U.S. Coast Guard, these three vessels would not be moored today in Costa Rica.

As we witnessed earlier with the signing of the agreement for the $43 million donation of four twin engines transport helicopters to Costa Rica from the United States there is still more to accomplish and with this transfer Costa Rica will be able to give direct support by air for maritime operations by helping track drug boats.

Additionally, and as equally important these helicopters will provide a significant expansion of Costa Rica’s air service’s ability to respond to natural disasters and to provide emergency medical evacuation in Costa Rica’s most remote corners. The United States is proud to partner with Costa Rica as it has proven time and time again that with the right tools and the right training they achieve big results and I would like to share just a few of those examples.

A vessel that was recently transferred to the Guadacostas within hours of the vessel’s first day in operation made a major drug bust the procurement and training of night vision goggles for the Border Police on their very first night of use they captured a major drug dealer and murderer sneaking across the border and only days ago on the first days the cutters were permanently moored in Costa Rica they were tasked with the responsibility of rescuing their 80 foot ship dead in the water off their shores.

And like every other time they performed magnificently operating their newly acquired 110 foot cutter they sailed it on their own accord and tolled the distressed vessel back to shore.

In closing, as individuals, that share this big world all we have to offer is the opportunity of our actions and to leave the world a better place than we found it. President Solis, Minister Mata, Colonel Arias and the entire Administration have been facing a war on drugs and a battle with organized crime in this beautiful peaceful country by their combined actions to protect Costa Rica’s citizens they have made their Country and the world a better and safer place.

President Solis, it has been my true honor to work with you and your team our security cooperation is closer and stronger than ever before and our long-standing friendship and partnership will only grow deeper as we continue to work with President-elect Alvarado and his administration. Together, we will continue to partner and to build safer communities in both our countries and together we will continue to provide stronger security for Costa Rica and the United States.