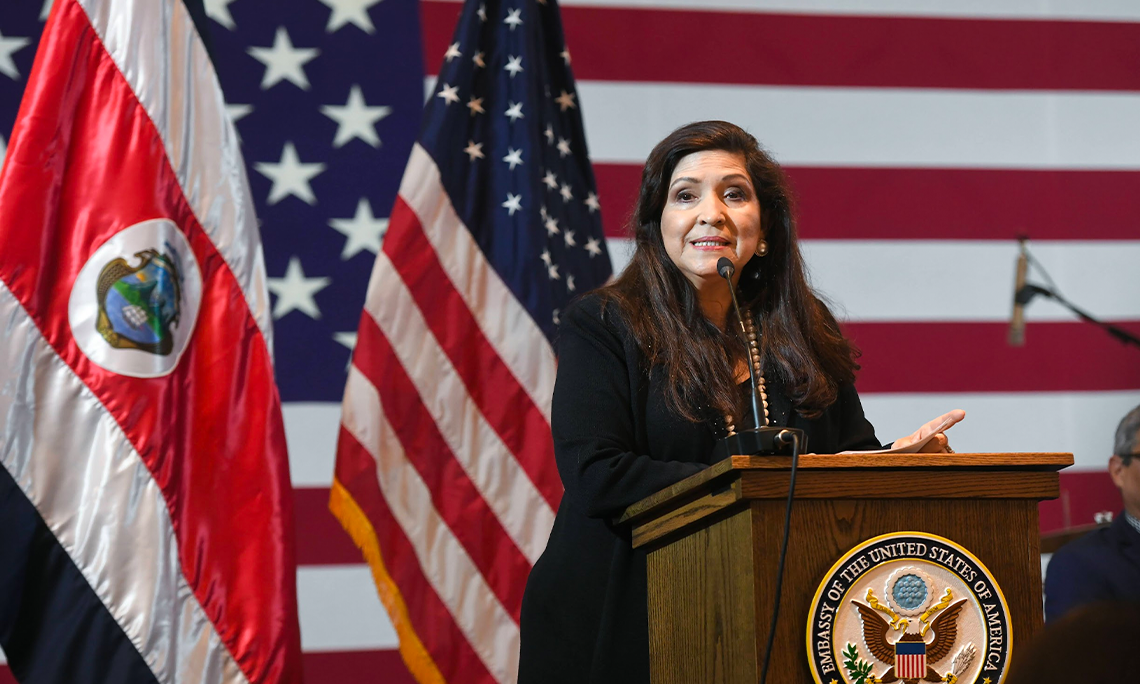 However, this is not my first Independence Day celebration on Costa Rican soil. My father Raymond Telles was nominated as Ambassador to Costa Rica by President Kennedy and served here as Ambassador for six years in the 1960s. When I think of those years of my childhood in this dear country, I remember them with warmth and nostalgia, in particular the Fourth of July celebrations in the former embassy residence.

It was an unforgettable day for the community. I still run into people—both Costa Ricans and Americans—who remember the embassy’s Fourth of July parties as something special when they were young. We had games for children, hot dogs and hamburgers, popcorn, cotton candy, and American cartoons. I am sure it was the only Fourth of July party on earth with both an Uncle Sam and a Costa Rican carreta drawn by oxen that gave children rides around the yard. It brought together two symbols that represented countries that were friends. I remember very well that, when I stood at my father’s side as we sang the national anthem, I felt great pride to be with him and to represent the United States.

Today while listening to the anthem, I felt the same. But also, listening to the Costa Rican anthem, I felt the same emotion at the beautiful memories of my childhood days, of the Alliance for Progress, of President Kennedy’s visit, of the beautiful country that my father called “a little piece of heaven,” of the deep, close, and continuous friendship that we have had since then and until now for many decades, and of our shared values that have been the bond that bring us together.

The world is different from the world when my father was Ambassador. But certain things do not change—the friendship, the lasting partnership, the values that we share such as democracy, openness, respect for human rights. These remain key to our relationship.

Those are values worth celebrating. Today we also celebrate another shared value—diversity, specifically, the incredible diversity of the United States, in all its forms. Diversity in customs and culture. Diversity in race, ethnicity, and sexual orientation. Diversity in religion and in thought. And now, right here, we are celebrating regional diversity with these delicious traditional dishes.

If you will allow me, I would like to refer to certain historic moments. The colonists came to our country from different places. The country was founded on the principle of respect for individual freedoms and differences in religious beliefs and opinions. The founding fathers designed a democratic government that was like nothing the world had ever seen. In general, the system worked: The United States remains the world’s oldest continuous democracy.

But our country has also been defined by those who didn’t have a voice at the Declaration of Independence. Native Americans were the first residents of our country and were then displaced. Millions of people of African descent toiled for centuries under the immoral system of slavery. It took 133 years after our Constitution was written for women to gain the right to vote. These groups have had to fight to gain the same rights as others. And thanks to those tireless struggles we are stronger as a country.

We are still on that path today, making efforts to perfect our union. If we celebrate the full diversity of our societies, and include everyone in our human family, if we offer them the opportunities they deserve to move forward, and if we successfully ensure all voices will be heard, we will be stronger, fairer, and safer as nations.

That’s one reason why the embassy supports programs here in Costa Rica that benefit a wide range of groups that represent the diversity of this country.

It is why we support soccer programs for girls from underprivileged communities. It is why we offer English programs for Afro-Costa Rican youth in Limón. It is why we offer job fairs to connect Costa Rican students from diverse backgrounds to U.S. companies. Likewise, it is why we support projects for women, particularly in vulnerable communities, for them to develop skills that can support their families. This desire to support diversity is why we march in the Pride Parade, as we did on Sunday. We know that when all people are represented in our society, it makes us stronger as a community and as a country.

Respect for diversity, democracy, human rights, rule of law, and freedom of speech are the values that our countries share and that bind us together as partners and friends. I’m proud of the work we’ve done together over our 171 years of friendship.

I want to share with you some of the initiatives we have worked on together during the few months I have been here:

Tonight, we celebrate the independence of the United States as a country, but we also celebrate the strong ties that bring us together with Costa Rica. We are very different countries, but we are united by shared ideals and values. From the bottom of my heart, thank you once again for joining us. It has been an honor to share our nation’s independence, and to celebrate our nation’s diversity, with you.