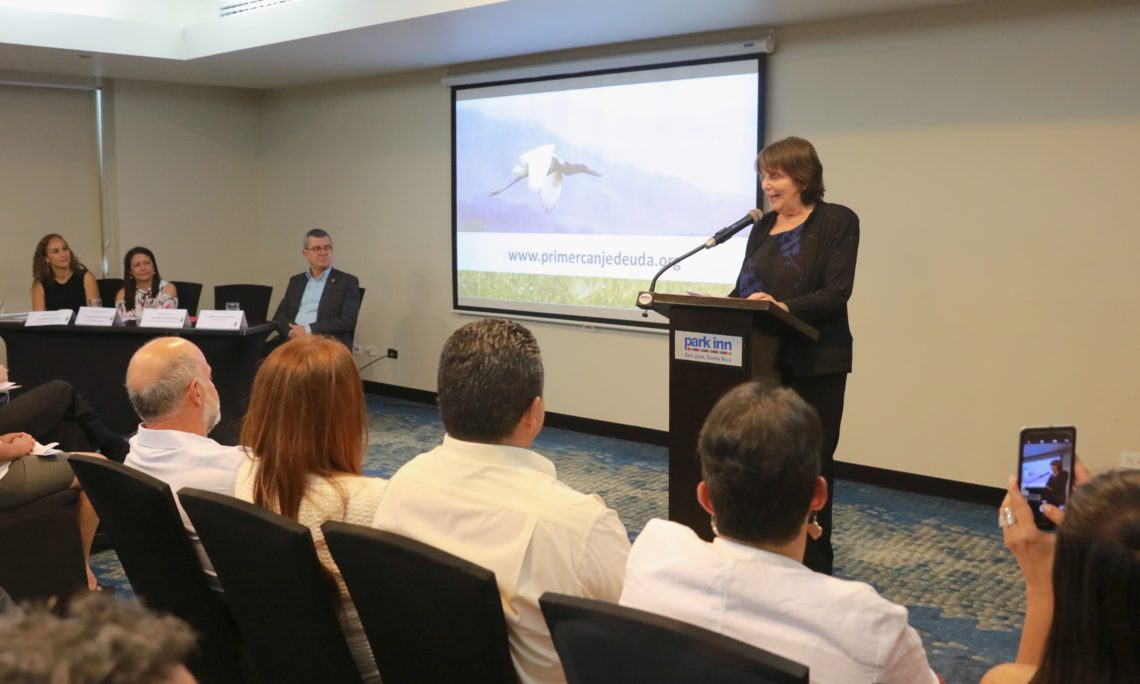 Mrs. Lesbia Sevilla, President of the Oversight Committee for the First Debt-for-nature Swap

Good afternoon. It is my great honor to join you on this important occasion, to celebrate the 10 th anniversary of the U.S. – Costa Rica Debt-for- Nature Swaps, established under the U.S. Tropical Forest Conservation Act (TFCA).We are very proud of the success of this program here in Costa Rica. Only fourteen countries around the world have debt-for- nature swap agreements. Onlyfive of them, including Costa Rica, have more than one. Valued at $52 million, Costa Rica has the second largest debt-for- nature swap program in the world, just behind Indonesia. It isn’t a coincidence. From the beginning, we have believed in Costa Rica’s commitment to protecting its abundant natural resources. We can see
from the results that it was the right thing to do.

In its ten years of existence, the debt-for- nature swap program has invested over one million dollars annually in forest conservation. The result has been an impressive expansion of protected areas, and the creation of sustainable stewards of tropical forests. I first served in Costa Rica in the 1980s, and I witnessed the ravages of widespread deforestation. In part thanks to these debt-for- nature swaps, Costa Rica became the first tropical country in the world to reverse the process of deforestation, increasing forest cover from 26% in 1983 to 52% today. This is a major accomplishment, one that we can all be proud of. The swaps invest significantly in NGO-led projects. Through these partnerships, we have ensured the conservation of almost 800,000 hectares of tropical forest in Costa Rica, as well as additional reforestation through the planting of over 60,000 trees. The swaps have helped Costa Rica’s National Park Service, SINAC, improve protected area management and sustainability, and to develop climate change adaptation plans for protected areas. They have also
financed the purchase of 217-hectares of property to expand the Guanacaste Conservation Area.

Today we have heard many examples of the successes of the debt-for- nature swaps. Others examples of successes include an environmental education program that Fundacion Corcovado and Fundación Neotrópica did with the Agujitas School in Osa, the Ara Project’s release of dozens of green macaws in the Southern Caribbean, and funding to improve the skills and capacity of a forest fire brigade in the buffer zone of the Chirripó National Park, an area especially prone to forest fires.

We are particularly proud of the way that the swap program partners have worked in close coordination with local communities that live in and around sensitive forest areas. These programs have successfully ensured that community members can earn sustainable livelihoods in ways that contribute to and mutually reinforce conservation efforts. One great example is Centro Cientifico Tropical’s work with Maquenque’s local community to sustainably commercialize mountain almond tree nut production. This project ensures an income stream to local
communities while simultaneously preserving the habitat of the endangered green macaw.

I want to express our special thanks and support to SINAC and MINAE, The Nature Conservancy, Conservation International, the Organization for Tropical Studies, Earth University, Costa Rica por Siempre, and all the project implementers and partners for working tirelessly to ensure that Costa Rica’s forests are protected. We are pleased to have contributed to Costa Rica’s noble efforts to successfully reverse deforestation and develop innovative new methods for tropical forest conservation. The positive impacts of the debt for nature swap program in Costa Rica have exceeded everyone’s expectations. A big part of this success story is how these agreements have strengthened the institutions – both governmental and non-governmental – that ensure forest conservation. Given its proven track record with Canje II, we are thrilled that Costa Rica por Siempre has become the new administrator for Canje I, and is today launching a new call for proposals. We want to especially encourage small community groups and environmental organizations to look at the opportunities available and
to develop and submit their own innovative proposals. We look forward to sharing their stories ten years from now, at the twentieth anniversary of debt-for- nature swaps in Costa Rica.
Thank you very much.